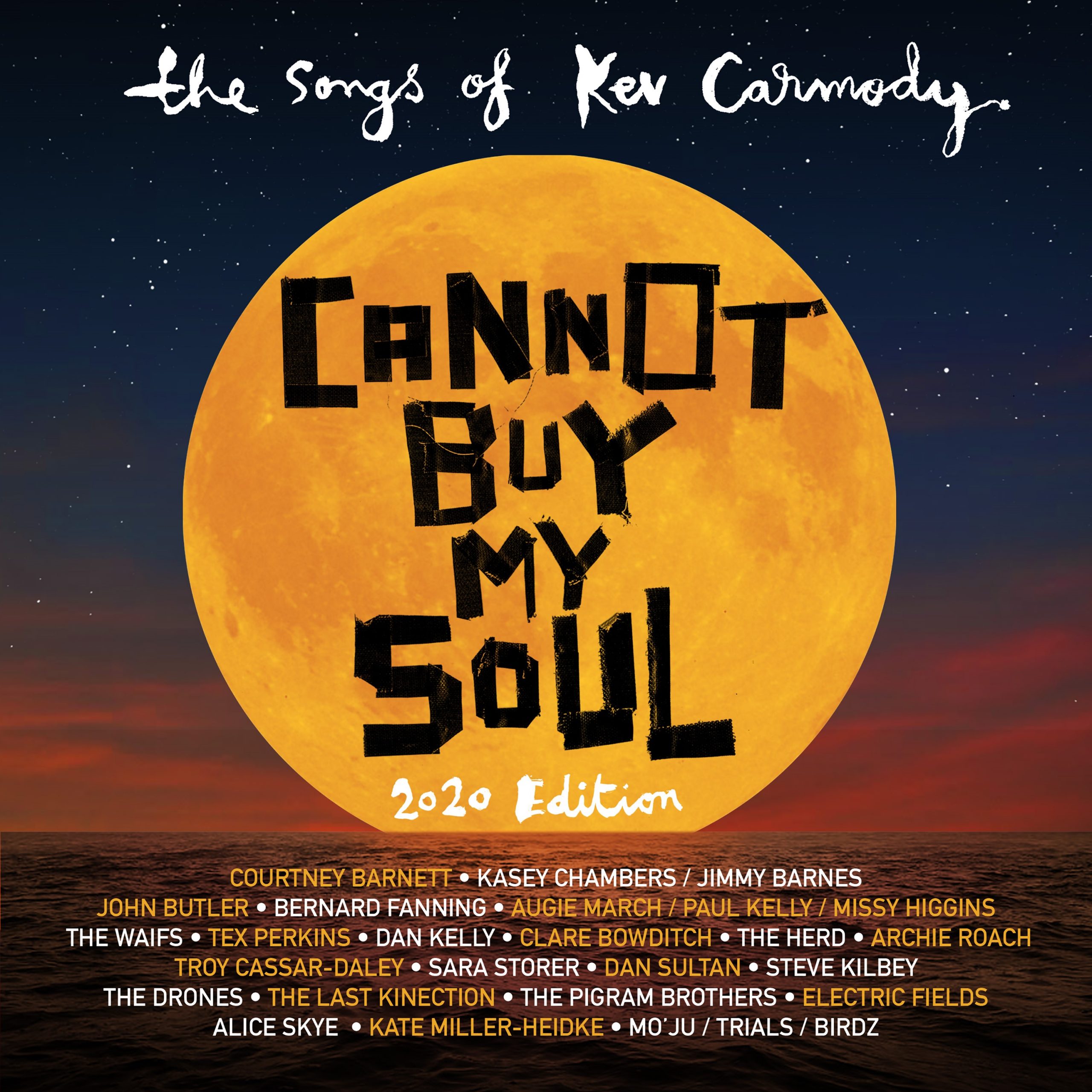 Kev Carmody is one of Australia’s pre-eminent indigenous singer-songwriters. A new audience was alerted to Carmody through the 2007 album Cannot Buy My Soul, produced by Paul Kelly, with versions of his songs by artists including Bernard Fanning, Missy Higgins, Troy Cassar-Daley and Archie Roach plus Carmody’s own performances. The album has been refreshed for this 2020 edition, produced by Siân Darling, with the original 32 tracks and six new versions of his songs. See track listing for multiple formats below.

Kasey Chambers and Jimmy Barnes deliver an extraordinary version of Black Bess, one of Carmody’s early songs with characters fighting their own personal battles. In this case they are Black Bess, loser in love and strung out on cocaine, Frankie the soldier blown away in Vietnam, and a drifter searching through rubbish bins “consoled by the role that his bottle will bring”. When Kasey and Jimmy sing the final line, “Do you have an idea what lonely can be?” there is no escaping the reality of those we sometimes walk past without a glance. Watch the visualizer for Black Bess here.

In its original form Rider In the Rain was a folk-rock song with some of Carmody’s most striking poetic imagery. Mo’ju, Birdz and Trials bring it to a new century with their mix of soul, hip-hop and electronica. The force of the lyrics (“This road called progress that runs from oblivion to nowhere”) is just as potent as the day it was written. Watch the lyric video for Rider In the Rain here.

Archie Roach’s version of the title track Cannot Buy My Soul (performed with Shane Howard)  is a proud and defiant rendition of Carmody’s original – a song that speaks vividly of the Black experience in Australia. Watch the performance video for Cannot Buy My Soul here.

“I’ve been moved by the wind upon the waters/And the shadows as the leaves are blown,” Kev Carmody sings in the opening lines of I’ve Been Moved, one of the first songs he wrote.

Carmody was 22 when he wrote the words to I’ve Been Moved. Aboriginal people had only won the right to be counted in the national census through a referendum the year before, in 1967. He carried the poem around with him for years before setting it to music but in I’ve Been Moved he already had shown the strong foundation for his music: the clarity, the imagery, the truth.

His 1988 debut album, Pillars of Society, remains one of the most powerful protest albums you will hear, from Australia or anywhere else, fueled by anger at injustice and hypocrisy. One of the key tracks is Thou Shalt Not Steal, with its searing description of dispossession (“In 1788 down Sydney Cove the first white people land/Said sorry boys our gain’s your loss/We’re gonna steal your land”) and environmental destruction (“In 200 years your materialism has plucked the forests clean”).

Another important point in the Carmody story was writing From Little Things Big Things Grow with Paul Kelly, about the fight for land rights by the Gurindji people in the Northern Territory led by Vincent Lingiari.

These songs became central to Cannot Buy My Soul and the six new recordings for the 2020 release show more of the depth of Carmody’s achievement.

Carmody’s openness to new challenges has been central to his life and his music, which is why he is so thrilled to hear his songs taken in fresh directions. “It’s great to hear the younger ones take it into their own genre, add their own words to them. That’s part of the oral tradition, pass it on.”

And sometimes it’s good to be proven right. Forty years ago he tried his luck at the Tamworth country music festival. It didn’t go well. “I got told to clear off, I didn’t have a permit and they didn’t like what I was singing about.” This year he returned. At an outdoor concert he joined Paul Kelly and his band to perform From Little Things Big Things Grow. He was surprised as Kasey Chambers, Jimmy Barnes and Troy Cassar-Daley took to the stage to join them in rousing chorus.

Cannot Buy My Soul is reissued on August 21 through EMI Recorded Music. It will be available on vinyl for the first time in a release containing the cover versions.