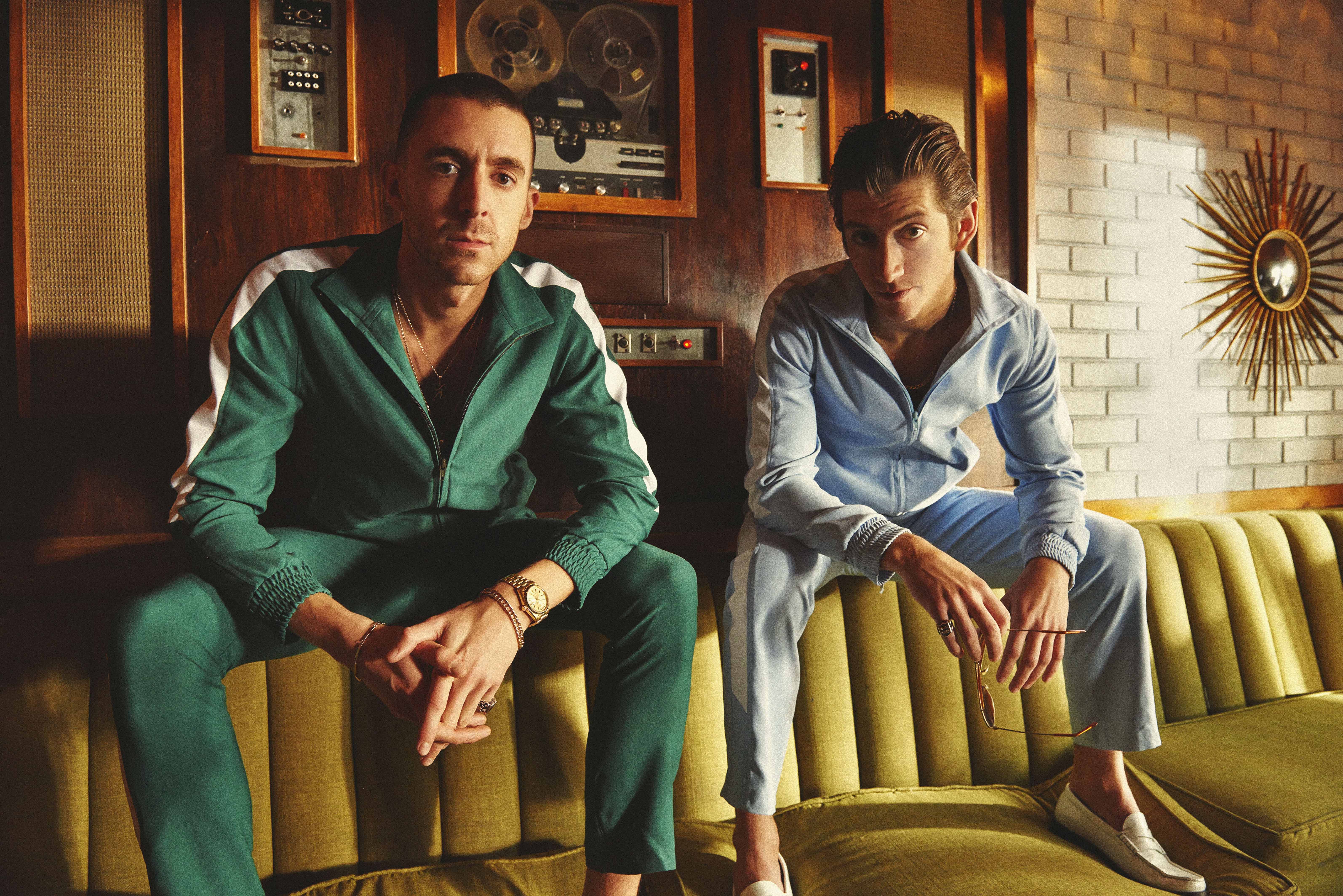 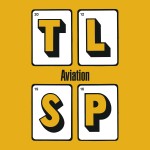 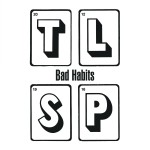 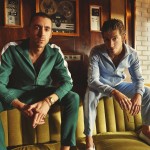 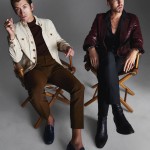 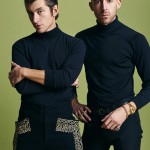 Whether or not we expected it, Everything You’ve Come to Expect has been a long time coming: to be exact, eight whole years since the release of the Last Shadow Puppets’ debut album The Age of Understatement. “When someone pointed that out, I was like, ‘Fucking hell, we’re men now!'” laughs Miles Kane, co-frontman of the Puppets with Alex Turner. “Our balls have dropped.”

Owen Pallett, who arranged the strings and horns on The Age of Understatement, had the same thought when he once again reported for Shadow Puppets duty last year. “I had run into Alex at festivals, so I saw him through his sort of longhaired gym-queen look to his current slick rockabilly style,” says the Canadian genius and Domino labelmate. “But Miles I hadn’t seen at all since he was twenty one. So when I saw him again it was like, ‘Oh my god, you’re an adult!’ It was so shocking to see this guy who’d been like a cheeky schoolboy turn into a guy who literally owned my ass.”

Suffice it to say that other obligations came between The Age of Understatement and its sophomore successor, not least the unstoppable rise of Turner’s Arctic Monkeys, who released not one but three hugely successful albums between 2008 and 2013. “I wish I had a more flowery answer, but there just wasn’t a chance to do a second album before now,” Turner says. “The Age of Understatement exceeded our expectations, but it was cut short because it was never assumed that we would take it on the road. And then we had to get back to our other bands.” (Kane embarked on a solo career after disbanding his trio the Rascals in the summer of 2009 and subsequently released two albums on Columbia.)

Neither Kane nor Turner ever intended to put the Puppets on the back burner where so many “side projects” languish in perpepuity: the creative outlet that the act offered to the two friends was far too important for that. “The Age of Understatement was the first time I’d looked at lyrics as just another element of the recording, along with the melody and the rest of the music,” says Turner. “Before that, every song I’d written had been ‘about something’ – in inverted commas – and this was the first time I’d started to look at the lyrics more as a component – not putting focus on it but thinking about the shadow it cast on the wall rather than the object itself. It was like dipping a toe in the abstract for the first time.”

Just as The Age of Understatement enabled the duo to explore an all-but-forgotten world of epic ’60s pop that contrasted starkly with the indie guitar-rock template of the Monkeys and the Rascals, so the second coming of the Shadow Puppets has given Kane and Turner new avenues that veer radically away from their other work. In fact, several of the songs on Everything You’ve Come to Expect have been germinating ever since the Monkeys finally came off the road after touring the mighty AM in November 2014. “We’ve been writing these tunes sporadically over the last couple of years,” says Turner.

Turner is all too aware that the “story” of Everything You’ve Come to Expect could be reduced somewhat crassly to the fact that both he and Kane now live in Los Angeles – and that the album was cut at Rick Rubin’s Shangri-La studio, the Malibu home to The Band in their Last Waltz heyday. “I’d love for it to be neat and tidy, like ‘We’re living here so it sounds like this’,” he says, “but it’s not really like that. When I listen to the album, I think of other cities – London and Paris – as much as I think of LA.” Kane concurs: “It wasn’t like a big ‘Let’s make an L.A. record’ kind of thing. It was more just, ‘Well, we’re here, let’s do it here.'”

Both men, however, admit that some distinctly American influences did seep into the album’s songs, even if they’re less detectable than the influences of Scott Walker, John Barry, and Ennio Morricone were on its predecessor. “There were some Todd Rundgren songs, and a Ned Doheny album called Hard Candy,” says Turner, who also concedes that recording in his adopted city was the “green juice that softened the edges” of the Puppets’ sound at Shangri-La. Another, slightly more improbable influence was that of Paul Weller’s Style Council. “I definitely wasn’t listening to them when we made the first Puppets record,” Turner admits. “With ‘Long Hot Summer’ there’s a sort of shimmery quality to that that we tried to introduce into the sonics of this album, and even melodically.”

For Owen Pallett, who this time worked more in situ with the band in the studio, the songs weren’t so much American or Californian as simply more open and expansive. “There was a lot more space for my orchestral work,” he says. “With the first record we talked about Scott Walker and David Axelrod as reference points for where they wanted the orchestrations to go. With this record I asked if they had any new reference points and they said, ‘Have you heard of a record called The Age of Understatement?’ So I was kind of pulling from my own private sources.” One of those turned out to be a classic of orchestral soul by Isaac Hayes, scored in 1969 by Detroit arranger Johnny Allen. “There were a couple of songs we were kind of struggling with,” Pallett says, “so one night we listened to Hot Buttered Soul and then went back and rewrote a couple of the arrangements.”

“I think working next door from us led Owen to different conclusions than last time, when we didn’t have that luxury,” says Turner. “He wanted to do less than he’d done before. He’s an incredible talent. We’d just wind him up and let him go.”

What strikes one on initial exposure to Everything You’ve Come to Expect is that it wears its influences less obviously on its sleeve. While the Puppets’ sound remains anchored in ferry-‘cross-the-Merseybeat sweep and romance – in the lost pop world of Brylcreemed Billy Fury – their new songs take us into the realm of Curt Boettcher (the title track’s bittersweet sunshine pop) and Roy Orbison (the bolero-driven croonerama of ‘Sweet Dreams, TN’). If lead single ‘Bad Habits’ is jaggedly snarling, ‘Miracle Aligner’ and ‘Dracula Teeth’ are seductive and melodically pining.

“I think what makes this record slightly different is that me and Al have found our voices more from when we did our first one,” says Miles Kane. “Obviously we’ve done more singing in that time, so we’d each sort of sit back and let the other one do his bit on the right songs. Like on ‘Sweet Dreams’, I think Al’s vocals are unbelievable, the way he soars on it and the way he croons. Whereas I can deliver the slightly punkier things like ‘Bad Habits’, I find that easier. But then you have that middle ground of songs like ‘Used to Be My Girl’ and ‘Aviation’ between those bookends. With the close harmonies on, say, ‘Dracula Teeth’ and ‘Element of Surprise’, they sort of blend into each other, so on those more sparkly tunes that was a new thing that developed for me – to make beautiful, sexy vocals.”

“I love the first record, but I can’t even compare it to this new one,” says Owen Pallett. “This one takes far more chances, and the stylistic detours don’t feel quite so out of step. There are many more interesting turns and twists. Lyrically there’s a lot more depth to it.” Pallett won’t resort to rock-critical tropes of “maturity” and “growing up”, preferring to see Everything You’ve Come to Expect in the context of change. “People like Alex and Miles – are always flipping the script, never trying to go back and make the same record.”

“How important is it to be looking over your shoulder?” says Turner. “Is it not more exciting, rather than trying to hold on to something – or to someone’s perception of something – to let that go and explore what’s in front of you, regardless of the green juice and the palm trees?”

For Owen Pallett, the Last Shadow Puppets remain a kind of “vacation home” for Kane and Turner, a place where – in collaboration with bassist Zach Dawes and drummer/producer James Ford – they can “cut loose a little bit and just have fun”.

“The whole point of The Age of Understatement was that there was no agenda,” reflects Kane. “We didn’t even know whether we’d put an album out. It’s different now, because we’ve both done things and obviously know about the Puppets. Yet we’re still best friends and that’s still the root of it, really. That’s the buzz of it.”